Very few get to ride the golden train of internet fame – especially in a meme carriage. Come on, there’s no higher honour. Here are a selection of meme royalty who have made it into internet stardom!

Meet Sammy Griner. In 2007 his mum took a cute photo of him at the beach and uploaded it to Flickr. By 2011 he was known as “the success kid“; a global character for whom everything goes better than expected! Virgin Media bought the rights to use the image in the United Kingdom. He also appeared in television commercials.

At eight years old, Griner put his internet fame to good use when he raised tens of thousands of dollars to give his father a kidney transplant.

In 2010, Meagan McCullough was arrested for driving under the influence of alcohol. In 2012, her mugshot was included in a list of attractive female mugshots on The Chive. Someone threw in the caption “wanted in 50 states” and posted the image on Reddit. Within months it was viral. McCullough says the ordeal was a wake-up call and she’s pulled her life together. She’s now a medical assistant raising her four children. Don’t you just love a strong moral ending!

We all love a little affection – but some take it way too far.

Laina Morris went viral only two days after uploading a Justin Bieber parody about clinginess to YouTube. She’s the face of one of the most recognisable memes and she’s absolutely owning it. She continues to maintain her YouTube channel and Twitter account (and stalk her boyfriend, of course).

If you’ve been living under a rock over the past couple of weeks, perhaps you haven’t yet seen this stock image masterpiece. The couple from the photograph are “surprised but happy” about their newfound fame.

Guillem, the 45-year-old photographer, has been shooting stock images for five years. Until this particular image went viral, he admits he didn’t even know what a meme was! Yes, I’m crying too. Guillem works with the models regularly, so it didn’t take long for internet users to hunt them down online. They’ve used other stock photographs which feature the same models to construct a story of the couple! The internet has made its very own (admittedly dramatic) fairytale – how cute!

Because the image has been shared, taken and copied thousands of times from different websites, Guillem isn’t making a profit from the image he took. However, he’s more concerned about the welfare of his models. He’s all for humour and fun, but is worried about the potential offensive material that may be posted over his images. After all, his models didn’t choose the meme life – it chose them!

If you ever feel really bad about your life, Bad Luck Brian is the meme to go to – because the pure despair you’ll have at his poor quality of life is enough to make you grateful for your own. 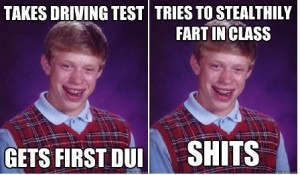 Kyle Craven was a student at Ohio College. A friend of his submitted his yearbook photo to Reddit, with the caption ‘takes driving test, gets first DUI’. It only received five upvotes. That same day, a second caption was posted, ‘tries to stealthily fart in class/shits’. This version was rewarded with more than 3300 upvotes in two months.

Despite the cringe factor of most of the memes, Craven says he has a reasonably good life. He was recognised by Seth Rogan and plays the hand chimes. I’m so glad life has picked up, Kyle.