At least 52 businesses across Wollongong are alleged to have been underpaying staff after a local woman decided to take a stand against the tacit practice.

Ashleigh Mounser, a recent graduate from the University of Wollongong said that while many young people in the Illawarra were aware of a culture of employees being underpaid, she was shocked with the hourly rates some business owners were offering, sometimes as low as $5 an hour.

“Everyone kind of knows about it but I didn’t realise it was that bad. I’ve been offered $10 before by a noodle shop. I went to a whole bunch of interviews and the majority of interviews were offering under $15,” Ashleigh said.

While searching for a second job, Ashleigh went to several interviews at fast food stores. At an interview at a chicken shop she was offered only $12 an hour, far below the minimum rate for her age. While she thought this was unacceptably low, she took the job with the mindset that she could keep looking for better paid work while still earning at least some money. After two days of work she went to an interview at another chicken shop. Unbeknownst to her the store was owned by the same man who hired her at the first chicken shop. Without realising he was already employing Ashleigh, he offered her the even lower rate of $10 an hour.

Fed up with how brazenly some employers were underpaying, Ashleigh posted on the UOW students Buy and Sell Facebook page where she asked for anyone who was being paid illegally to contact her so that she could submit a group complaint to Fair Work Australia.

The response, Ashleigh says, has been phenomenal.

According to Fair Work Australia the minimum wage for a casually employed fast food worker 21 years or older is $24.30 an hour. For a restaurant or café worker of the same age, the casual rate is $22.76 per hour. Despite this, many people who contacted Ashleigh were being paid far less.

“I thought $10 was obnoxious but there are so many people accepting less than $10,” she said. 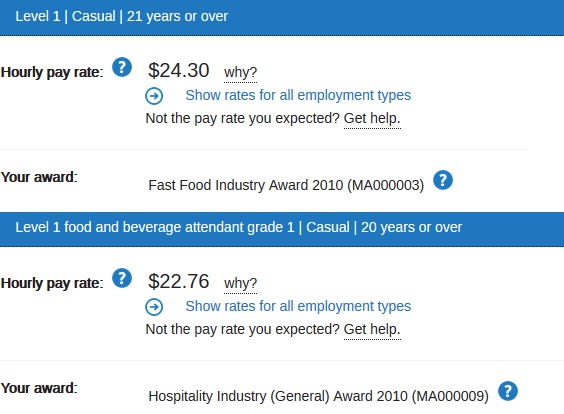 In addition to being underpaid,

many young employees have come forward with stories of sexual harassment, abuse, being offered flat rates for a shift regardless of length, unfair dismissal, and being forced to work 11 hour shifts without breaks.

Most of the 52 businesses named to Ashleigh are either cafés or restaurants located in central Wollongong, including some of the city’s most popular eateries. Most are independently owned though a few fast food chains were also named as underpaying their staff. Only a few businesses named were service stations, but these were, according to Ashleigh, some of the worst cases.

“I knew a guy who was on his third week of an unpaid trial for a service station. He’s foreign, so he just kept working and hoping they were going to pay him. He’s getting paid $13 an hour now,” she said.

“He was also told that he wouldn’t be paid until he could show that he could shave his beard. He shaves his beard every morning but it just grows back.”

“People were messaging me saying it’s so disheartening when you’re looking for work for so long and you finally get a job and they offer you $8 an hour. They feel like they have no option,” Ashleigh said.

“They just need the job, it doesn’t matter how badly paying it is.”

Ashleigh’s stand against underpaying young employees has attracted the attention of the president of the South Coast Labour Council, Jo Kowalczyk, who is offering her assistance in seeking reparation from Fair Work Australia. She’s unsure whether Fair Work will fully address the issue however, with several people Ashleigh’s been in contact with saying they’ve reported unfairly paying businesses before, but no action was taken. Even if Fair Work Australia were to carry out investigations, they lack the authority to force employers to repay any money owed to their employees.

For Ashleigh, standing up for young people’s right to fair pay will likely come at a cost, conceding that she probably won’t be able to work in Wollongong for a while. She feels, however, that her current situation – with a supportive family and friend network – she’s in a better position than many to address the barefaced greed of some businesses. She was able to reject the rate of $10 an hour offered at the second chicken shop. Other people will have no choice but to accept.

“He’s going to find someone who will do it. I’m fairly lucky. My family lives in this country and I’m in position where I’m not going to starve. But there are people who will have to take that job.”