The Babysitters Club has to be one of the biggest tween fandoms of the past few decades, full of wholesome moments. One of my favourite childhood memories is traipsing through dusty boxes of books at garage sales with my mum because nine times out of ten you could find a handful of Ann M. Martin paperbacks for half your weekly allowance.

I grew up admiring Kristy’s strength, cheering on Mary Anne’s sporadic bouts of confidence, and jealous of Claudia’s fashion sense (and her bedroom. God.) – albeit never stopping to consider that leaving a newborn baby with a twelve-year-old is a horrific idea.

So, when I sat my 23-year-old self down to binge Netflix’s adaptation of The Babysitters Club, I was in for a big ole nostalgia trip. And good God, the series delivered. Cast to absolute perfection, the series is a curation of some of the best, and most wholesome, moments in the book series. Here are some of my favourite:

It makes sense to start at the very beginning, with the OG entrepreneur. This twelve-year-old queen spotted a gap in the market, created an idea to fill it, and monetised it. She’s an absolute boss woman, and we’re here for it. From the gig economy to managing competition and effective advertising, Kristy is the business brains behind the BSC.

We also join Kristy on her journey of navigating the line between boss babe, and bossy. She learns to relinquish her micromanaging tendencies and place her trust in the other members.

Mary Anne is meek and mild but when push comes to shove, she isn’t afraid to be in charge.

Mary Anne’s character arc is beautifully portrayed, and cleverly suggests the second style of leadership. While Kristy is vocal, fearless and a natural-born leader, Mary Anne is instead organised and passionate – and relies on her voice, when it counts.

This becomes evident Mary Anne is babysitting for a transgender child, Bailey. When she falls ill and Mary Anne calls 911, the doctors don’t initially seem to realise Bailey identifies as female. Bailey becomes increasingly distraught as the doctors, who barely look up from their clipboards, continue to use ‘he’ and ‘him’ pronouns to describe the child. Mary Anne takes the doctors outside the ward and firmly demands some changes. It’s a hugely heart-warming moment, both for Mary Anne’s character growth and for Bailey’s acceptance.

Does Karen Brewer being the creepiest damn kid ever count as wholesomeness? Sure, the first time we see her onscreen she’s conducting awake for her doll, but the kid is happy, confident and unapologetically herself.

Everything about this child is to die for. From her overactive (and comically violent) imagination to her insistence that her mellow neighbour is actually an evil witch named Morbidda Destiny, Karen is super lovable. My only critique is that she didn’t get nearly enough screentime.

Claudia is vibrant, creative and switched-on – but unfortunately, her parents don’t seem to see it. They’re more concerned with her fail grades in maths – which are particularly dismal given that Claudia’s sister Janine is a certified genius.

So it’s a nice, feel-good moment when Claudia confronts her parents and explains that algebra just isn’t her cup of tea, “I’m not Janine, and I’m tired of feeling like I have to be.” She tells them that instead of feeling like her gifts and hobbies – like art – are unimportant, she wants to focus on them instead.

After all, there are different kinds of intelligence. 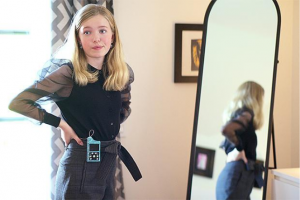 Although Stacey initially hides her condition from the other girls, she comes to embrace it. Instead of hiding her insulin pump under her clothes, at the end of episode three, we see her attach the pump to the outside of her clothing and proclaim, “it’s cute, right?” to her mum, unashamed.

The Babysitter’s Club is an uber wholesome experience overall. Each member of the group was cast beautifully, and each character arc had its own touching moments. Watching this program was a huge nostalgia trip, and I’m so ready to binge the season another ten times.