The article contains minor spoilers for the first two episodes of The Dragon Prince .

When I say the word ‘cartoon’ are statements about politics and culture conflicts the first thing that spring to mind?

Probably not, right? I would be willing to guess that things you associate with cartoons include funny voices, bright colours, crazy action, and, of course, jokes. After all, politics is for mature audiences and not for people who like cartoons. Well, that may be about to change as Netflix’s new original series, The Dragon Prince, has found a way to balance both.

A good example of this balance comes midway through the series’ second episode. Ezran and Callum, step-brothers and series protagonists,  need to solve an Indiana Jones-style puzzle to open a door. The only way to solve it  is by pressing rocks and stones in a specific pattern. Ezran begins to go about solving the puzzle. Callum, watches a moment, before asking what everyone watching is thinking:

“What’s the difference between a rock and a stone?”

It’s a funny moment, one of many in The Dragon Prince; it is a cartoon after all – but it’s not a joke for the sake of humour. Instead it’s a tool to relieve tension. Ezran and Callum are caught up in a vast political dispute that has placed both of them in danger. This balance of humour and adult stakes won’t come as a surprise to those familiar with showrunner Aaron Ehasz’s other famous work: Avatar: The Last Airbender.

The Dragon Prince’s balance of humour and adult storytelling isn’t the only trait it shares with Avatar: The Last Airbender. Also present is a fleshed-out fantasy world which is brought to life with gorgeous animations and populated with fully realised characters. All these similarities might lead you to think that The Dragon Prince is just a remix of Avatar: The Last Airbender, but that couldn’t be further from the truth. Avatar: The Last Airbender even at its most mature moments, was still a fun adventure for kids. The Dragon Prince is a story about the politics of the world today.

Nowhere is this clearer than in the opening moments of the show.

Immediately we are introduced to a world that is divided, both literally and metaphorically. On one side are the humans and on the other are elves. The two cultures have been divided for centuries and, at the start of The Dragon Prince, are on the brink of war. The humans have a committed a crime that has fractured the elves’ society and upended world order.

When The Dragon Prince begins, the elves are planning revenge. They seek to kill the king of the humans, who is also the father of Callum and Ezran. This is an act that they know will start a war, but they believe that the humans’ crimes cannot go unpunished. 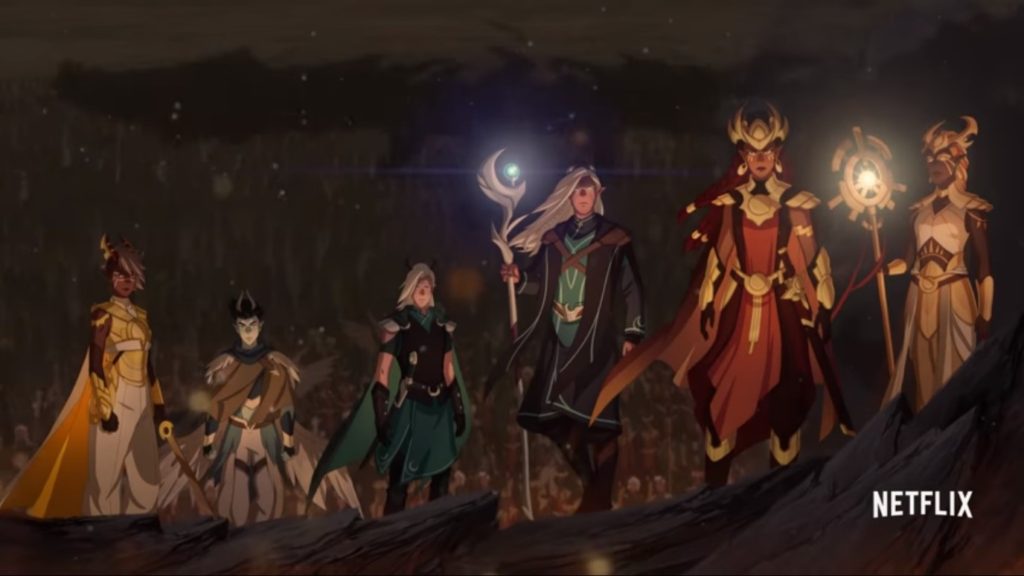 It’s clear that Ehasz has a lot to say about the current state of the world. He’s an American with a critical view of how his country operates on the world stage. The politics of the humans have more than a passing similarity to the Trump administration. The world of The Dragon Prince is designed to act as a comparison to our own.

The fraught tensions between humans and elves serves as a metaphor for the real-world situations where culture is at the centre of conflict. The Dragon Prince is a metaphor for the Israel-Palestine conflict, but it can also apply to the tensions along the US-Mexico border or US-North Korea relations.

Through using a fantasy world to explore these ideas, Ehasz escapes having to create precise analogies. Instead he focuses on what interests him: how America’s unwillingness to compromise on cultural differences creates conflict, and how to fix it.

He does this through three main characters: princes, Callum and Ezran who’ve I mentioned before, and a young elf named Rayla. At the start of The Dragon Prince, Rayla is part of a team tasked with assassinating the human king and princes. During the second episode, Rayla comes face to face with Callum and Ezran, and the reality of having to kill them. Rayla is filled uncertainty, she knows their deaths will lead to war. Callum knows this too and challenges her, leading to the following exchange:

Rayla: “It’s not the same thing because we are attacking you, provoked.”

Previous generations’ decisions weigh heavily upon our young heroes in much the same way it does the youth of today. The elf and princes, like us, feel trapped in the mess their parents have made. They have human-elven war, we have unstable international relations. Youth on both sides of the conflict want it to end, but they lack the means to do it themselves. If they bring their ideas forward to adults they will be dismissed. Youth, in the eyes of the adults, lack experience. 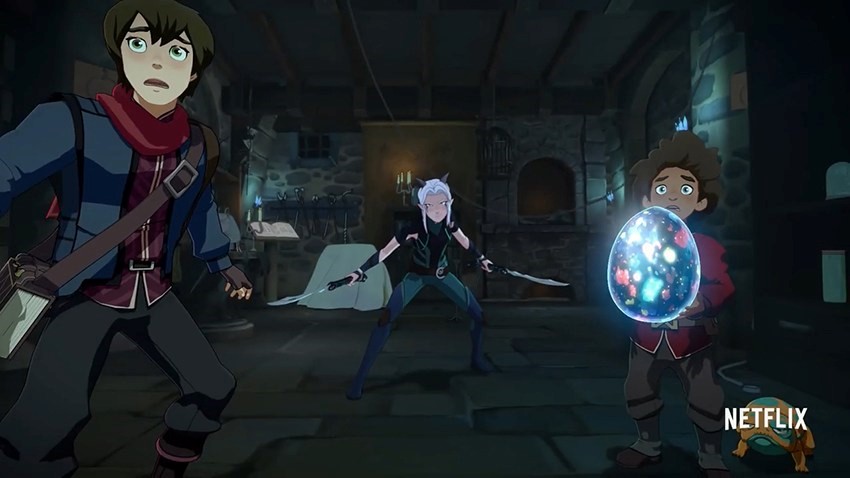 This will resonate with The Dragon Prince’s audience, especially returning Avatar: The Last Airbender fans, who are now in their early 20’s and aware of the world’s problems.

By the end of the second episode, Callum, Ezran, and Rayla have made a discovery that could end the conflict between humans and elves. An unlikely alliance forms between the three and they set about trying to stop the war. They do this without the help of adults, because adults are too set in their own ways of thinking to change – even if that change could mean the end of the war.

“The great illusion of childhood is that adults have all the power and freedom, but the truth is the opposite”, says one character to Callum. “A child is freer than a king.”

It’s in youth that The Dragon Prince believes there is hope for the future. Young people are willing to challenge the status quo if it means things will change for the better.

Ehasz wants to remind his young audience that while the world’s divisions may seem insurmountable, they aren’t. We are more similar than we are different. Ultimately, the only thing that divides us is our decision to remain divided.

“What’s the difference between a rock and stone?”, asks The Dragon Prince.

The answer is nothing at all.

Season one of The Dragon Prince is available on Netflix.