Many of us considered migrating to New Zealand after the Liberals won the federal election earlier this year. If you’re still on the fence about a happily ever after in Jacinda Ardern’s magical realm, we’ve got some (iced) tea to spill that might just convince you to grab your passport and run.

There’s no better way to incite a feisty conversation in Australia than to ask your comrades whether they put certain foods in a refrigerator or a kitchen cupboard. 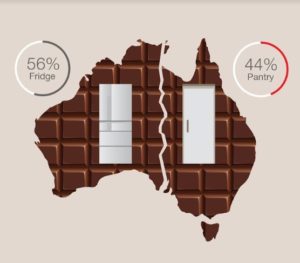 The correct storage of chocolate has divided national opinion for years and finally the results are in; we prefer our chocolate chilled. The clear divide shows 56 per cent of the nation says the sweet stuff belongs in the fridge, while only 44 per cent champion the cupboard.

The survey, conducted by Mitsubishi Electric Australia as part of its 2019 Home Trends Report, revealed we’re also split when it comes to the gender divide – with blokes choosing to keep it chilled (63 per cent), while women prefer it at room temperature (51 per cent). 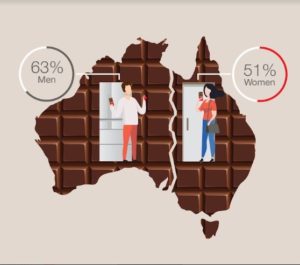 State by state the vast majority (75 per cent) of Queenslanders, (59 per cent) South Australians, (68 per cent) West Aussies and (52 per cent) NSW prefer to refrigerate their chocolate, while Victorians buck the national trend with 61 per cent instead keeping it in the pantry. 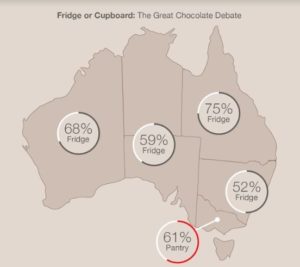 So, where should we be keeping our chocolate?

“Technically, there’s no reason chocolate has to live in the fridge. Chilled chocolate can taste different as cooler temperatures alter the flavour. I’d recommend storing your chocolate in a cool, dark, airtight space, unless it’s high summer and you enjoy a sticky, melted mess.”

More than half of Australians store their tomato sauce in a refrigerator, according to a national survey conducted by Mitsubishi Electric Australia. Tomato sauce has divided the nation with 57 per cent choosing the fridge as the victor. Most of NSW (63 per cent), Queensland (63 per cent) and South Australia (56 per cent) store their tommy sauce chilled while Victoria and Western Australia disagree and prefer it fresh off the cupboard shelf.

Whilst a majority of people place eggs inside the fridge, a somewhat disturbing 10% do not. One in ten people in the country do not refrigerate their eggs (maybe these guys don’t want to waste fridge space on eggs they only purchased to throw on politicians?)

Jam was also an overwhelming fridge favourite, with 73 per cent of Australians choosing to keep it cold. Vegemite (74 per cent) and bread (61 per cent) are primarily pantry foods, however.

Environment and climate play a major role in our differences in opinion, with spread storage proving the most diverse – 37 per cent of Queenslanders opting to keep Vegemite in the fridge (WHY, Queensland?), more than double their Victorian and South Australian neighbours (both 18 per cent).

Queensland residents also go against the grain with jam, with 85 per cent placing it in the fridge, compared to only 64 per cent of South Australians.

In Queensland homes, you’re also much more likely to find bread in the fridge, with almost half of respondents (48 per cent) opting for chilled loaves, well above the national average of 39 per cent.

“It’s important to store household staples properly, just as you would with any fresh produce. Outside of visible signs, it can be difficult to know when something’s reached its use-by date. A good old sniff test is always advisable but refer to the product’s packaging instructions if you’re still unsure.”

Where do you place your staple groceries in your kitchen? Let us know in the comments below!