It’s hard to put a finger on one thing that made Bridgerton so alluring. At first glance, Bridgerton is gorgeous. The costuming, the sets, the actors — all impossible to take your eyes from. At second glance, you realise the plot is a fake dating trope amidst a time period you can’t quite place.

I mean, that one dream sequence Daphne had where she was dancing with Simon, underneath the flowers and the lights? Delightful. The inclusion of electricity, however, while spectacular to the scene, did obscure the time period we were playing in. I’m no expert, but a quick Google search shows that lightbulbs were invented around 1879. It’s not accurate. But, look—

Are you telling me that wasn’t worth it?

What I came to realise while watching it was that — it’s a period piece to appeal to modern sensibilities. The costumes, the sets, the historical accuracy, the diversity; the women’s stories. A lot of what made Bridgerton spectacular to watch is what was probably wildly inaccurate about it.

Was there glittering tulle on the dresses in the early 1800s? Or embroidered flowers? Probably not. Did it make such a treat for the eyes? Yes. My God, yes it did. The newest iteration of Emma brought us beautiful, original dresses — and now, Bridgerton takes it a step forward. Daphne, our main character, was gliding around in some of the prettiest dresses I’ve seen in media, period. Even the dresses that were intended to be frumpy were exquisite to look at. If only for the sheer detail on them. There was such a vibrancy of colour as well, which again, probably was not available during the 1800s. 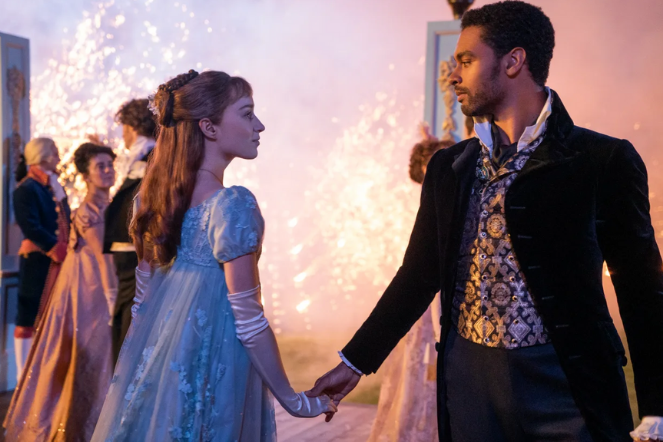 It truly is a mire full of clichés. It’s every Pride and Prejudice or Emma fanfiction. All these things I can intellectually agree should make me roll my eyes are framed in such a way that I enjoy it anyway. An enemies-to-friends-to-lovers. A fake dating scheme with an innocent, loving woman and a dark, brooding, mysterious man. I want to cringe but my God was it good. It’s a modern storyline in an older genre and refreshing to see.

It was steamy too. I’m not usually much one for the overused innocent woman/rakish man sort of dynamic, but Daphne had such electricity about her. She was portrayed so well it was like the first time I had seen it.

Simon, the main love interest, is a person of colour. And he is not the only one. In fact, the Queen in Bridgerton is a black woman. And she looks fantastic as the queen. She is powerful and striking and represents such a huge shift for the genre. Typically people of colour find themselves either excluded from pieces such as Bridgerton, or their characters are “servants or enslaved”. Despite how this is not true of the time period, and realistically racism was hugely debilitating to this POC — the dynamic cast made the storylines so much more intricate and interesting.

Bridgerton says: yes, there can be diversity within period dramas. Yes, there can be mentions of queer existence (and hopefully, in the future, a storyline all of its own). Yes, there absolutely can be capable and powerful women. Dramas like Downtown Abbey that insisted on “historical accuracy”, to the exclusion of diversity, not only represent a poor regurgitation of the same, tired old stories, but also a lack of vision. A lack of progress.

There was a hugely interesting story about how women functioned in society during this (the 1800s?) time period. Daphne’s story was of coming out into society for the first time to search for a husband. Importantly, it was about her struggle to find love in marriage. Despite how Daphne was searching for a man, the story remained very female-centric. The men were secondary, even during the main romance plotline. What was important was watching Daphne journey her way to happiness, rather than win male approval.

Furthermore, the way her younger sister Eloise was revolted by this reality of womanhood, and Daphne resigned to it, was fascinating. The characters talked often about a woman’s autonomy to choose her husband and the ways in which she can be wrongfully “ruined” by standards which do not apply to men. These are themes that have been used before in period pieces. The open discussions the Bridgerton characters had about them, and the many different storylines the women had, however, were refreshing.

Despite all its faults — or perhaps, because of them — Bridgerton represents a step forward for the genre. It has proven that it can be done and done so well as to be a huge hit. Would I watch the show again? Absolutely. Would I say it the best fictional piece in the world? I’m not sure. Let me take another look at Simon’s forearms and I’ll get back to you.