About two years into our relationship, the person I thought was the man of my dreams came out to me – she told me that she was really a woman, and wanted to stop pretending to be a man and be her authentic self. Sure, the last three years being in such close quarters with someone transitioning into their correct gender have not been easy and it’s been a big transition for me too – with a pivotal point being my discovery that my romantic and sexual attractions extend far beyond men.

I now identify as pansexual, which to me means that I could be attracted to anyone regardless of gender identity, or reproductive organs, or sex chromosomes etc. I’ve learnt a lot about hormone replacement therapy (HRT) and how with increased oestrogen, combined with dropping the masculine mask she previously hid behind, my girlfriend always cries in movies and has a much more emotional reaction to the cute animal videos I send her. We’ve learned new ways of loving each other and being intimate with each other. We share clothes and make up and we have cute pampering days together. It’s been a beautiful journey of growth and we’ve learned so much about each other and ourselves. It hasn’t all been easy though…

I’ve had to be careful about what I say and avoid talking about certain things that may trigger her dysphoria. When she’s having a really dysphoric day, I’ve watched as she looks in the mirror or at photos of herself and cries about the body she sees and how it doesn’t match up with what she feels it should be. I’ve been heartbroken at times when she’s come home and recounted how she had rubbish thrown on her. I’ve learnt about all the bureaucratic hoops transgender folk need to jump through to get the treatments they need and to have their official identifying documents reflect their true identity. I’ve watched on as my girlfriend has been told multiple times that these government agencies have given her conflicting information and made her do more than should be necessary to have her details updated. 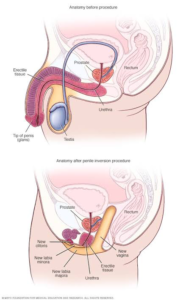 I’ve learnt so much about transphobia, systemic discrimination and my privileged position as a cisgender person. I’ve accompanied my girlfriend to Thailand for her penis and testes to be transformed into a vulva and vagina and I’ve aided her in a painful and lengthy recovery, inclusive of having to empty her catheter bag during the night in those first weeks when she could barely move. But as the days have gone by I’ve watched as her vulva turned from a bruised and stitched up mess directly post-op into one that honestly looks no different from any cisgendered vulva I’ve ever seen (of course all vulvas look different) and seems not to experience pleasure any differently either. I’ve had her gleefully come home, telling stories of the random guy that gave her his number and the girl she works with who asked if she had any tampons on her.

Everyone has moments in their lives that completely change them, like having a child, finding out yourself or a loved one has cancer, or getting that big break and becoming a celebrity. Falling in love with a transgender woman is the moment that completely changed mine. Sure, things have been quite complex and there has been a lot to get used to, but now these things are just a part of life. People have asked me endless questions about my girlfriend and our relationship, such as how we have sex, how far she is going with her transition and other prying queries that make us feel like curiosities. You wouldn’t ask a seemingly cisgender person about what they plan to do with their genitals or how they have sex, so why on earth do so many people think that those kind of nosy questions are appropriate to ask someone who is transgender? At the end of the day, we’re just like any other couple.

Of course I bring my own various issues to the relationship which pose challenges for her too. We work our jobs. We argue about whose turn it is to pay the bills. We discuss the merits of cooking at home, ordering in or eating out. We debate on which series to watch an episode of before bed while we cuddle our cats. We sleep in each other’s arms. We wake up, have breakfast, feed our cats and do it all over again. Sure, being in an intimate relationship with someone who relates to gender completely differently to the way I do has its challenges, but we learn from them. Our challenges make us stronger and make the good times better and more worthwhile. I love my girlfriend and I wouldn’t change things for the world.

If you want to chat to me about this subject at all, find me on twitter – @ephy_92