As a child, I would have to say I considered myself a bit of a beauty doll expert. Like a lot of little girls, I had Barbies, Bratz Dolls, baby dolls, rag-dolls, you name it: I was all about them. But I never had a doll like these. And now, years since dolls have ever captured my interest, I desperately want one!

Typically when we think of art we imagine something beautiful. It’s easy to celebrate what we already know to be beautiful. However, a truly talented artist can take something ugly and show us its beauty. This is what the work of doll-maker and artist Marina Bychkova does. Not only does Bychkova reveal beauty in what is not popularly considered beautiful, but she also explores serious social issues through the medium of her dainty and hyper feminine Enchanted Dolls.

Bychkova was also interested in dolls as a child. However, unlike me she didn’t just play with them, she wanted to make them and actually made her first doll out of the back of a ceral box. Now, her dolls can take up to 350 hours to make and sell for around $300 K.

One of the most interesting things about Bychkova’s dolls, apart from their ethereal appearance and haunting expressions, are the deeply mature themes they explore. Bychkova uses her dolls to open discussion about feminist and political issues, ideals of beauty and the messages we send our children through recreating characters found in fairytales, folklore, literature and world cultures.

The use of dolls as a medium for discussing often confronting topics is genius. Not only is the contrast between the beautiful, frail dolls and the intense issues imprinted on their bodies striking, but the medium of dolls is off-putting. To use a child’s play thing as a serious talking point is unusual to say the least and, as a result, powerful.

In her artist statement, Bychkova explains this further:

“Each ball-jointed porcelain doll intricately conveys an aspect of our humanity. Unique and delicate, their forms evoke a strong emotional response, haunting us with their vulnerability. Simultaneously innocent and sexual, Enchanted Dolls depict highly stylized images of femininity, while at the same time reflecting on life’s playful naiveté.”

Not only are these dolls striking ad unusual, but the conversations they are inspiring are important.

Here are just some of Bychkova’s deeply moving creations:

This doll was created not only as a tribute to brave breast cancer survivors, but also to highlight the difficult choices they face. Truly questioning what it means to be feminine, Surviving shows true beauty post trauma.

This doll explores the five stages of grief. In a society where too often women are told to “smile, beautiful“, Grief takes an up-close look at sadness and depression, acknowledging that people have the right to be sad and experience grief, even if it may not be to others liking.

Exploring the messages we send our children, Stockholm investigates the abusive relationship in one of Disney’s most beloved fairytales, Beauty and the Beast. Bychkova says that “the very act of romanticizing the fundamentally disturbing theme of female abduction, subjugation, and unlawful imprisonment to teach little girls compassion towards monsters seems to be a manifestation of a Stockholm Syndrome in and of itself.”

This beautifully tattooed doll explores the definition of womanhood and a woman’s role in society. “Is a woman’s role in society defined by her biological function, even today in the age of reproductive freedom? Do we as a species exist only to reproduce?” Bychkova asks. Traditionally, woman have been expected to exist to raise children and have this family making be their sole existence, but this archaic notion hardly feels appropriate today. Aren’t we more than a vessel?

Again examining fairytales, Necrophilia looks at the morality of promoting a story like Snow White to children. “There are strong elements of violence and sexuality, such as rape, murder and incest present in many classic fairy tales that we tend to overlook,” Bychkova explains.

“The tale of Snow White is one of the best-known and most beloved offenders, containing references to mental illness (the talking mirror), premeditated murder (the poisoned apple), sexual assault (kissing an unconscious person), and perversion (necrophilia).”

This doll shows the beauty in the unusual. Although not traditionally considered beautiful, Bychkova believes that albino people of African descent are uniquely gorgeous. Here, she shows true beauty in what might otherwise be considered ugly. 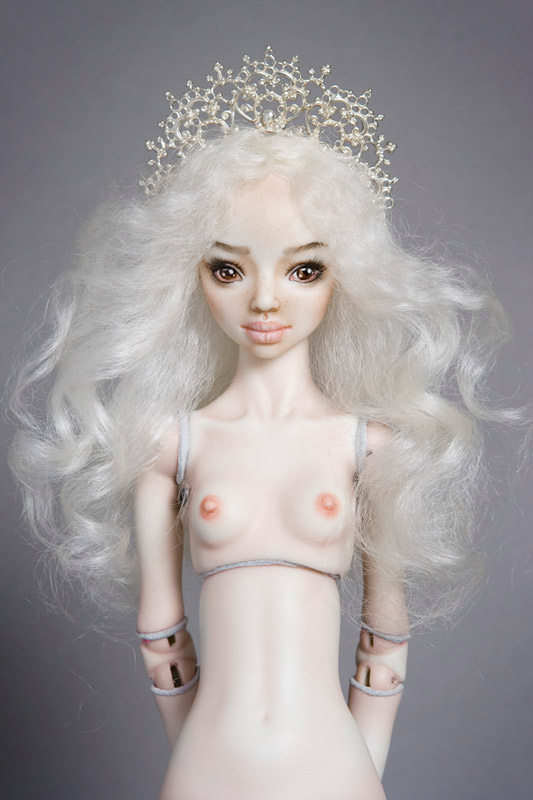 Bec is Chattr's Head Editor/sassy fangirl. She's in her final year of a double degree: Bachelor of Communications and Media Studies (majoring Journalism and Professional Writing) and Bachelor of Arts (majoring in sociology). She loves asking poignant and tough questions but also being ridiculous in our staff vids.