Beach games, bus rides and a contestant walking out on The Bachelor.

Tonight’s episode of The Bachelor was one of the standout episodes of the season.

Following the previous episode, we begin at The Bachelor mansion where Jen is, again, explaining how she is God’s gift to the Earth and still has not been able to obtain a single date with Matty J.

The conversation flows in the direction of who hasn’t been on a single date yet (obviously a hot topic of conversation in the mansion, as almost all your besties have pashed your bf. Definitely not awkward). Simone tries to speak but Jen’s bellowing voice moans and groans about not having a single date.

Why not yet Matty, she’s literally God’s gift to Earth, can’t you tell from her amazing personality? I think she’s Jen-erally a nice woman. At least when she has her mouth shut.

Osher then tries his new magic trick and appears out of LITERALLY THIN AIR to give the girls a date card. When he appears, like the great Houdini, Osher (in an extremely REAL analysis of his own life) says “deep inside I pretend you’re happy to see me, but I know you want me for one thing.” It’s okay mate, maybe you should try the whole name and letter for a last name thing again? Seems to work for Matty J.

Osher then drops the date card like a hot new mixtape and scurries off to chuck on his casual attire for the beach date.

Tara grabs the date card, like one of the kids she takes care of, and starts reading in the most derogatory voice I’ve ever heard (don’t worry, still love you T). Jen then complains AGAIN about how she hasn’t had a single date and she would be gutted if someone else got it. So what happens? Elise gets the date.

We are introduced to the single date of the night with classic Matty J music, featuring manly hand rubbing. I don’t like it. It makes me feel awkward. Why are you rubbing your hands together? I’m waiting for Matty to do a Mr Burns and say “excellent” as Elise pulls up to the bus.

For 20 minutes, Elise and Matty sat in a bus and talked while the camera was shaking, giving me motion sickness. She’s lived in Sydney, he’s lived in Sydney. “Oh that’s where I used to live.” Do we really care? Not really. Just pash, get the rose and let us see Jen mentally implode on the group date. Thanks.

Matty then stops at a flower shop that he only ever goes to for his mum and gets Elise a bouquet of flowers. Does Matty J have mummy issues? That’s beside the point as Elise gets every single type of flower except for a rose.

We then cut back to the girls at the house with every second phase from Jen being “that bitch.” She can’t help herself. She’s just such a catch. Maybe she should use the fishing pole that she made Matty use back in the Sharn days.

Lisa then walks in with a group date card and all the girls scream at boyfriend sharing time.

Simone and Jen are writhing in pain due to not being able to see Matty J alone for another week. It’s okay girls, at least you weren’t the season’s caterer.

Back to Elise and Matty. The bachie begins to talk about having a small burn of a relationship with Elise. I’m not sure if he should be going to his GP to get that checked out or not. He brings the ex hockeyroo to a lemonade stand and whips out his stick and hands it to her.

Did I mention they were playing hockey?

Elise takes it, with the little pride she has left after featuring on a reality television dating show. Elise proceeds to score against Matty twice in a row. Matty then saves the last one against Elise (phew, at least they stuck to the script). He celebrates like he has ended world hunger.

Elise is only inches from Matty’s face but misses the opportunity for a kiss (and a cold sore). Hun, you don’t want Matty J’s fungi infested lips.

Elise is then kidnapped and taken onto a boat with Matty. He mentions they have a spa on board. Of course they jump straight in the water, whilst in a boat (on water). 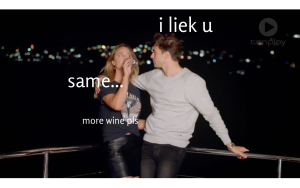 After 20 different transitions between their facial expressions of lust, love and uncomfortableness, they finally pash. He proceeds to give her a rose, sucks on her face for a little bit longer and we get a sweeping view of the city. How romantic. The dark horse of the competition strikes! Elise is in the building everyone!

The girls turn up to the beach and are told they are going to be playing  Mario Party-style games that are ‘authentically’ Australian. The girls LITERALLY fight to spend time with Matty, using nets to catch his balls and throwing their thongs in an esky. Oh, and beach volleyball. More balls. Lovely.

The girls are then picked for teams in a school yard-style selection that is extremely reminiscent of my own primary school life. The girls leave out Simone (I feel you girl) in this brutal team-picking trust exercise. She chooses to go on a team with Jen. I mean at least Jen is the best at everything, right?

As the game begins, Jen uses her self-proclaimed “mongrel” side to get her team ahead. Sadly, this is to no avail and her team loses. She proceeds to call the winners “bitches” and “undeserving”. Jen is a respectable lady.

The winning team, comprised of Lisa, Tara (my love), Elora and Cobie, run off to yet another of Matty’s beach side mansions in the rain. So romantic!

Tara and Matty find time for some sausage talk and some deep and meaningful mumbo jumbo about how Tara is a quiet achiever. Tara then takes another mouthful of Matty’s sausages, gives Matty a bite and they live happily ever after.

Cutting to the chase, Jen throws Lisa under the bus because she “isn’t here for the right reasons” and “she’s a bitch”. It appears Jen is playing the game of Australian Survivor and is literally quoting that she is a “Game Changer“. Wrong reality show Hun.

Then, in the walk out of the season, Jen decides that the rest of the girls in the house are trying to stir up drama. She is sick of all the backstabbing and bitching behind her back. She packs her bags without a word and leaves, saying she “deserves better” than our Bachelor, Matty J.

Jen left the mansion and all was right in the world. I think this is the first time that she hasn’t won something. At least she was the best at causing trouble.

That’s it for this week!

Catch The Bachelor on 7:30pm Wednesday’s and Thursdays on Network Ten.