WE DID NOT EXPECT THIS. THESE ARE LEGITAMATE TEARS. THIS HAS NEVER HAPPENED.

We started this night with low expectations and no clue what the hell was going to happen. First off, what the heck is Osher wearing? Can the Paradise budget not accommodate for his size or some stylist pick out his clothes for him? He looks like a five-year-old that had picked out some random shit from his parent wardrobe. Not cool Osh Kosh, not cool. 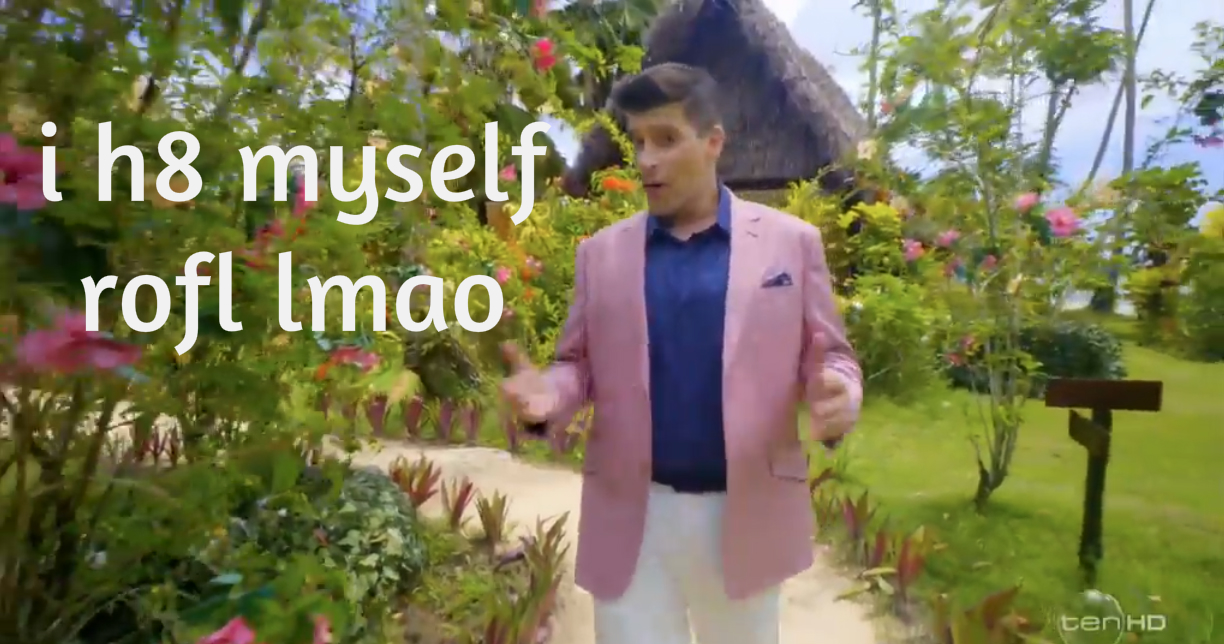 He starts going on some rant about engagements and love and something or rather; we don’t know what’s going to happen as this is the first time the majority of us have seen something like this.

We get re-reintroduced to all the couples. It’s kind of boring and the sexual connotations of the fantasy suite begin to sink in. This moment was hard to explain to my parents to say the least.

After the break, we meet up with Megan and Jakey the Snakey. They begin to talk about the commitment ceremony, but Jake insists he tries out his new palm reading skills. So he takes Megan’s hand and sees their future together; sadly, the reality of the situation didn’t turn out that way. 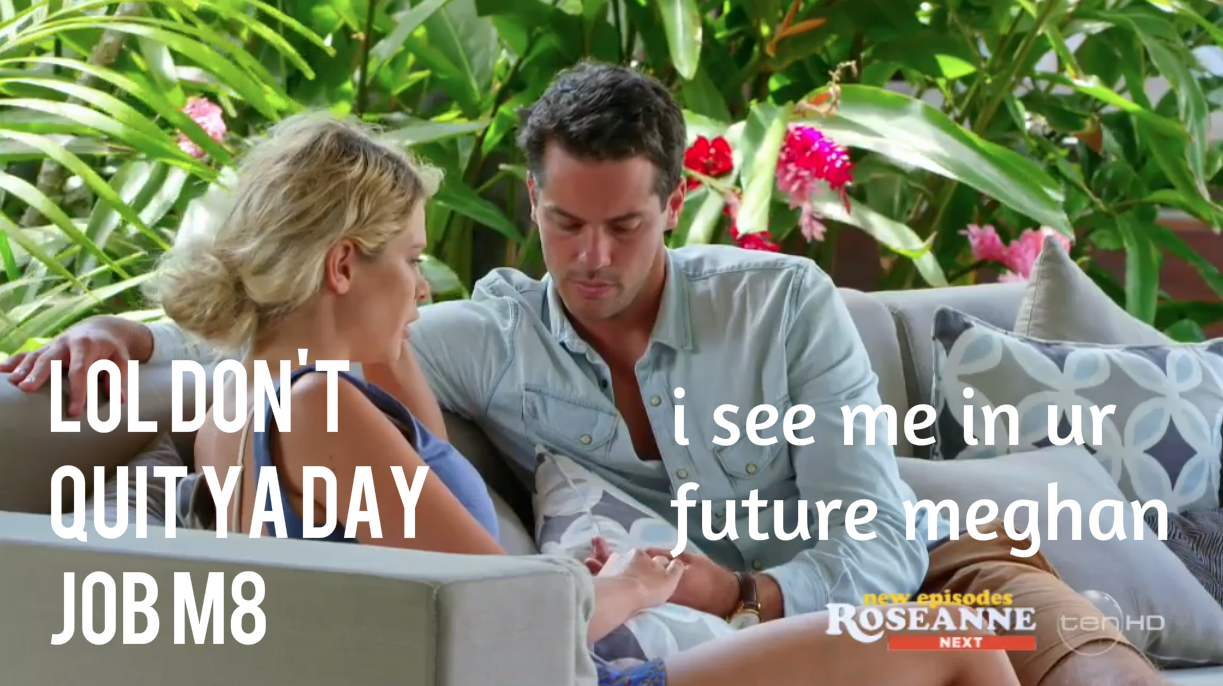 Megan breaks up with Jake after a 16 hourish long episode of her not being sure if he was the right one. Finally. Cheers across Australia can be heard as Florence hosts her own ‘don’t date Jake’ party in some windmill somewhere.

Oh well. Back to the actual couples.

Jarrod mentions that the only reason that he wants to date Keira is because he’s heard she makes a mean burger. He promptly gets irritated with the wind, because like this relationship, it could blow him away in seconds. Also, Keira doesn’t like the wind. Quality television everyone. 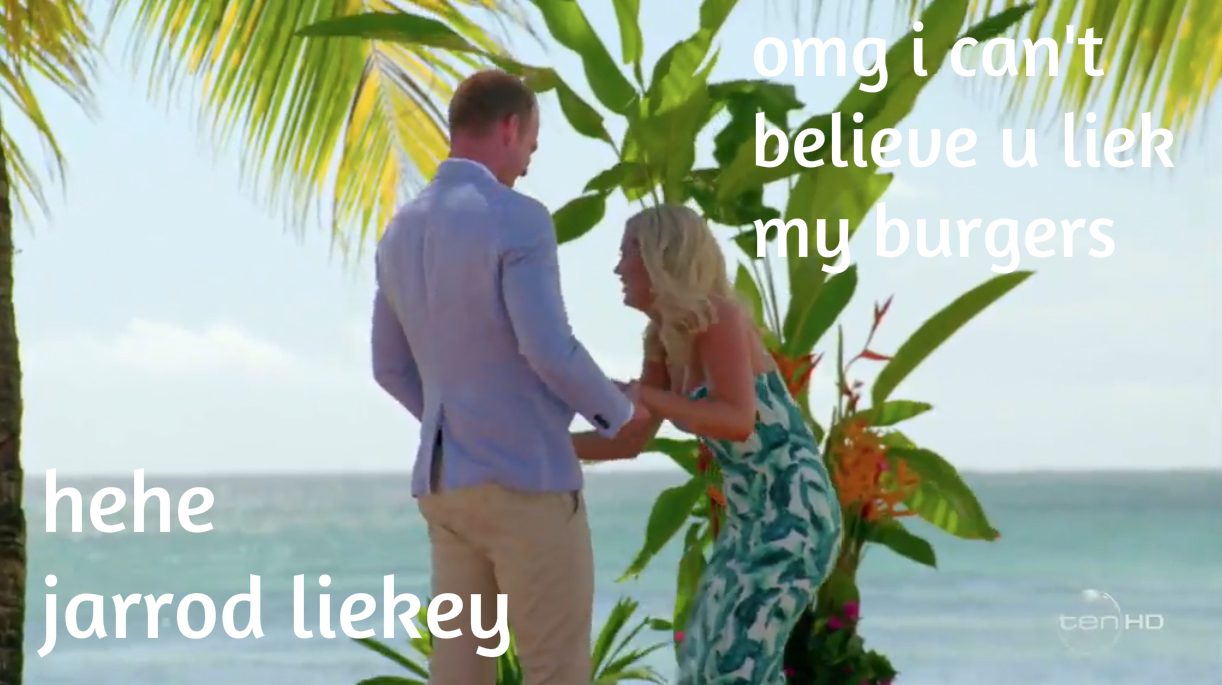 Jarrod goes into an extremely emotional, lovely, clingy commitment speech that makes Keira cry because it is so cringe. It’s adorable and awkward all at the same time. When it’s Keira’s turn,she attempts to be completely serious for the first time in Paradise.

They both exchange I love you’s, rings and Keira notices that Jarrod’s fingers are quite large. Well. They then proceed to eat each other’s faces for the next five minutes.

Moving onto Grant. This is Grant’s second time attempting to create a future with a woman in Paradise and by this point, you would’ve thought he would go for a more conventional way of meeting people, like Tinder. 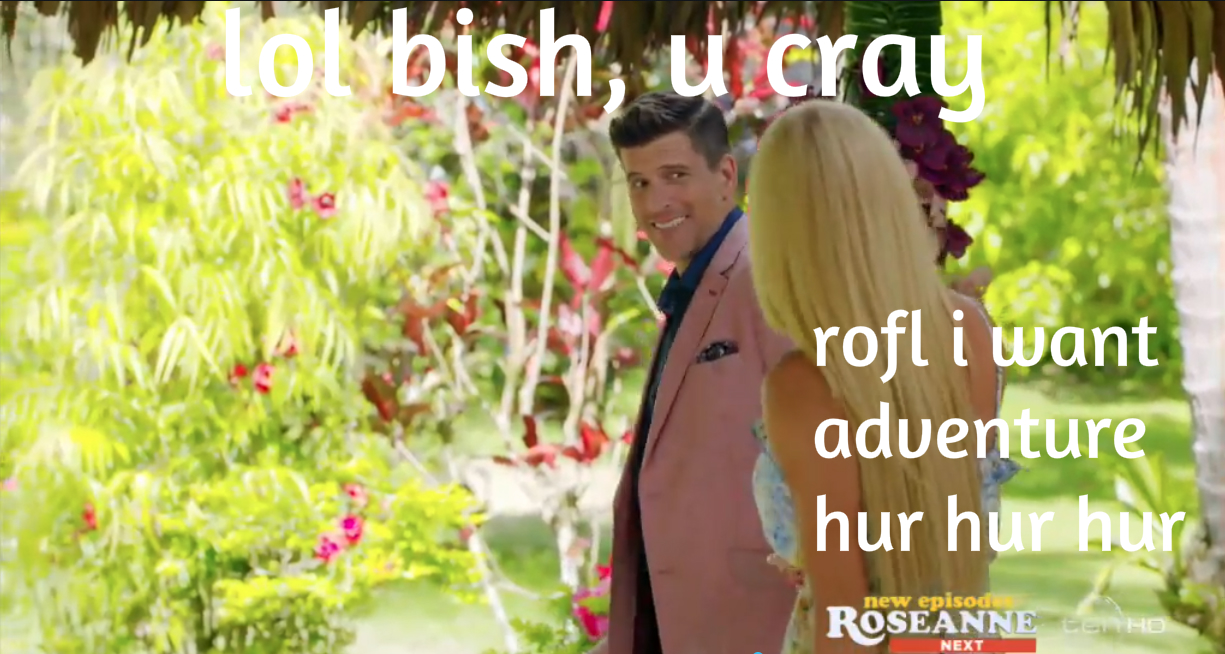 So, what does this American do? He asks Ali to commit to him and move all the way to L.A because not only does he love her, but she loves him! Honey, if you want an extraordinary life, try eating Maccas for a month straight. THAT is what I call and extraordinary life.

They exchange vows of sorts, look into each other’s eyes, and shmack on for the next five minutes while we cover the eyes of our nonexistent children and cry into our very full bowls of ice-cream. Oh wait. Just me?

We finally arrive to THE CUTEST COUPLE EVER. Sam and Tara are the dynamic duo of Paradise, giving us the full-on comedy duo fantasy that we all need and crave from a show like this. Their journey has actually been so genuine and fun to watch.

Sam meets Osher in his outfit and we can see Sam is squinting as hard as he can so he doesn’t have to look at him. Osher wonders why he is apart of this show and then realizes that he is there to make the other guys look better. After a quick hug and bro chat, Sam goes through the door and waits for his princess.

Tara, who looks drop dead gorgeous, walks into Paradise. Sam is visually and physically frothing over her. We find out that Tara’s life goal for the two of them is to “grow into big people” instead of what they are now. Uh, okay.

They both say beautiful little speeches and then, SAM BLOODY PROPOSES. Unprecedented, BUT OH MY GOD THE BEST THING TO EVER COME OUT OF THIS SHOW.

We are all so stoked that something actually worked for once and that Tara finally got her happy ending with Uncle Sam. Jeez, that sounds really bad when you put it like that.

The credits roll, we find out all the couples are happily living life apart from Grant and Ali. It is then revealed that Ali will be the new queen of Australia, ruling it as our new Bachelorette for 2018. Marketing ploy.