With a light nip in the air, the doors to the Riverside Theatres opened. The foyer was buzzing with activity, people from all genders and ages smiling and gathering; a bookselling table was crowded with eager buyers. Tickets were being pulled from book bags as a sound resonated through the building like a school bell. It was time for the first events of The Sydney Writer’s Festival‘s All Day YA program.

Young adult has always been a go-to genre of mine and to have a whole day dedicated to it was simply incredible. Having expanded their program this year, All Day YA hosted ten events with two running parallel to each other and was convened by Catriona Feeney. 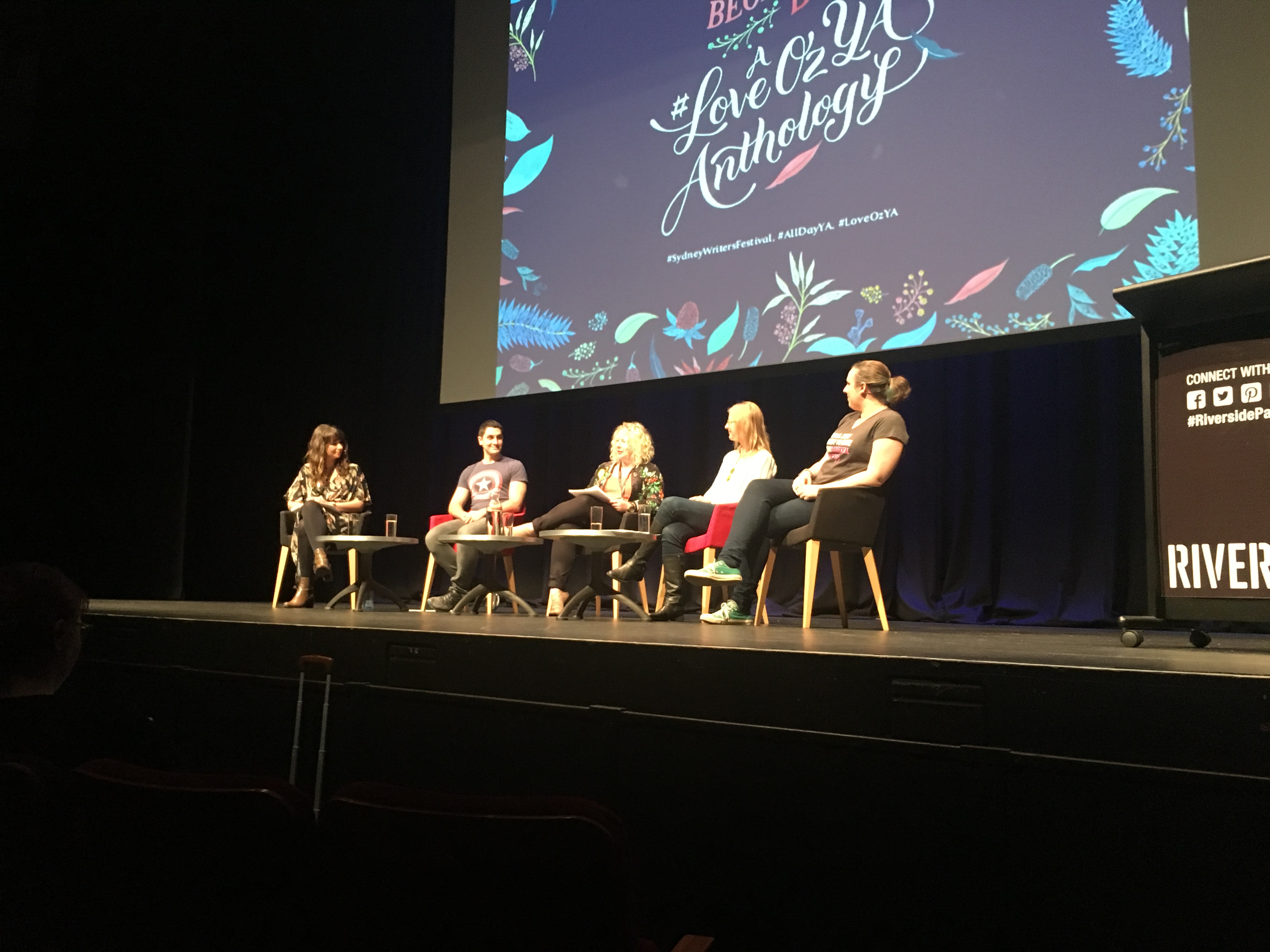 Seated in the Love OZ YA Anthology: Begin, End, Begin panel, the theatre was filled with excited voices and subtle tweeting. Run by Danielle Binks, the panel featured Amie Kaufman, Will Kostakis, Jaclyn Moriarty and Gabrielle Tozer, all of whom are brilliant YA Australian writers and offered a lot of insight into the Aussie literature community and the development of the #LoveOzYA hashtag. What started as a meeting of authors in a small restaurant in Melbourne has now started a movement promoting Aussie YA works.

With engaging discussion on diversity, queer content, explosions in space and the importance of literature for young adults, it was an energetic and hilarious panel.

Will: Contemporaries are not all Aussie YA fiction can be #AllDayYA

Amie believes the biggest misconception about Aussie YA is that is super Aussie, all about small towns and slang. #LoveOzYA #AllDayYA

.@gabrielletozer on sticking to a project "it's important to remind yourself why you wanted to write this in the first place" #AllDayYA

Keeping Company: Characters Across a Series offered an excellent insight into the creation of characters and how they adapt across a long period of time. Run by Catriona Feeney, the authors in discussion were James Bradley, Amie Kaufman, Garth Nix and Lynette Noni whose books range from fantasy to sci-fi to dystopia. What is it that actually keeps characters going across books?

It depends on the author; sometimes there’s a lot of thought involved like questionnaires, casting actors and writing childhoods, or the characters come mostly formed and the author simply fills in the pieces. Lynette trusts in her characters to tell the story and take her through the motions, and James believes you need to know things about them that makes them real, even if it’s not nice. Not all characters will be loved either; one person’s favourite may be someone else’s most disliked for different reasons.

On the topic of side characters, they’re are incredibly important to the story. It’s those interactions that sometimes define pivotal moments throughout a series. Amie gave a lovely analogy about side characters being like seasoning, they’re good in certain amounts without overwhelming the story.

@garthnix is all of us: I like fictional characters more than I like real people sometimes @SydWritersFest #SydneyWritersFestival #alldayYA

Lynette: I like seeing how my side characters interact with my main character, it helps me get to know my MC more #LoveOzYA #AllDayYA

The More than Meets the Eye: Diversity in YA Fiction panel led an eye-opening discussion on the portrayal of diverse Australian teenagers in literature. Mediated by journalist and author Sarah Ayoub, she was joined by writers Randa Abdel-Fattah, Erin Gough and Will Kostakis to talk from personal experience about their sense of identity, the issues within writing diversity in YA and what is it like to be pigeonholed.

Randa kicked off the conversation by stating that as a minority, it is a calling to humanise those who are not represented. As a Muslim woman, she has often been in situations where she’s had to humanise her religion.

On the other hand, Will spoke about the conflict between being a Greek and gay, finding it hard to understand why one is okay to talk about over the other. He found a lot of backlash from Christian schools on his book The Sidekicks which featured a gay character, and has since sought to understand his clash of identities where only one is accepted by society, placing Will in his pigeonhole as a Greek writer.

Following on the thread of identity, Erin Gough said, “I don’t wake up and look in the mirror and say ‘Hey, look, it’s Gay Erin’ … okay sometimes I do.” The inability for writers to not only write about diverse characters but be diverse themselves is a dilemma slowly being addressed.

Randa: Identity is fluid. I want to right to feel like a Muslim woman one day, and an Australian woman the next. I define me.

Will: when you right a book with solely white, straight characters, that is misrepresenting the world. #AllDayYA #sydneywritersfestival

Talking Tough Topics with Jennifer Niven saw a shift in the room as the heavy issues were dived into. Jennifer was gentle and respectful as discussion moved from relationships, suicide, mental health, body image and dysfunctional families.

She expressed her belief that young adults go through a tough time during their teens with issues that are sometimes not represented in literature. With characters like Libby, Finch, Violet and Jack from her novels, she sought to not only write their story, but address these issues in a way for young adults to understand.

“All of the novels I’ve written are stories I wanted to read,” she said. We can only hope that Jennifer dives further into these topics in her upcoming novels.

This year’s YA program was a success! With a variety of authors, publishers, publicists and editors, the conversations were endless and engaging. The Sydney Writer’s Festival has done a brilliant job at celebrating Australian and international YA stories, leaving us exhilarated and warm-hearted.