Kanye West’s tweets are a pure example of when you’re too drunk at a party and should not be on your phone. The rapper, notoriously known for his temper tantrums, rude antics, misogynistic lyrics and daughter named after a compass, tweets his inner most personal thoughts ranging from “Sometimes I get emotional over fonts” to “I need a small loan of 53 million dollars.”

Although hating on Mr West and his child-like life choices are hilarious, sometimes we can’t help but unfortunately see a little of ourselves in his tweets.  Here are five times Kanye West was secretly our spirit animal. (Source: Kanye’s Twitter)

I feel you Kanye! I dress to check out my bum in passing mirrors, or look at my reflection in car windows. Don’t we all wish someone loved us as much as Kanye loves Kanye? 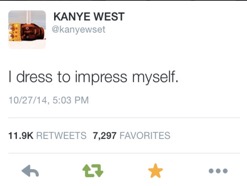 Adulting sucks! When did I ask to be brought into the world to have so many responsibilities, bills, and goals to achieve. Maybe I just wanted to live life as a sloth. Kanye doesn’t have time to look after water bottles, why do we need to?

Don’t you hate when you have a month full of bills that you have to resort to living off 2 minute noodles until pay day. Uni textbooks, phone bills, rent, or $3000 candles, you know – just the necessities. 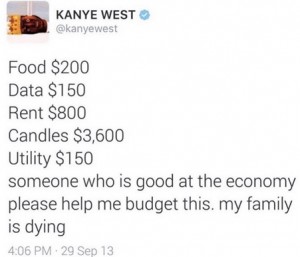 When you need a spare 1 billion dollar donation to spread your ideas to the world but already used all your money on fur coats and mansions.

Sometimes you just need a seven floor building distance between you and human civilisation. Preach Kanye.

So although Kanye didn’t let Taylor finish, we hope these tweets from Yeezy never stop coming and that he never develops a filter for his wildly outrageous statements.

Jessica studies journalism & communication and media majoring in global media. She has wanted to be a journalist since she could read & write. Fun fact: Jessica used to make a magazine called J-mag when she was 5 years old & sell it to her family for 50c. Ever since, she's wanted to work in editorial.