Commuters were confronted by a heavy police and drug dog presence at Sydney’s Central station earlier this week.

Strip search tents were set up in the middle of Central station, claiming to be “privacy screens”, causing outrage on social media.

ABC employee Chris Dengate took to Twitter regarding this strange occurrence, which gained a large amount of traction from social media users: 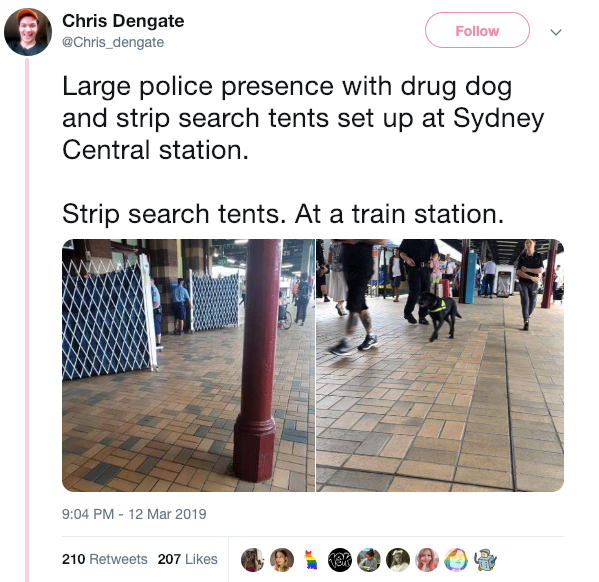 The moderator of social media page ‘Sniff Off’ informed The Daily Mail that at least 15 police officers and one sniffer dog were seen roaming the platforms at Central.

Police have responded to 10 Daily with the following statement:

“The NSWPF regularly patrol our train stations and it is common practice to erect privacy screens for the purpose of a search. They are not strip-searching tents.”

“These operations are conducted on a regular basis and often utilise privacy screens,” a second statement said.

Police have not elaborated on what the outcome or results of the police presence were, but the public has been quick to assume it was a drug detection operation.

Many comments were made on the Twitter post by users, showing their shock and disappointment at the invasive act in one of the busiest areas of Sydney:

Greens NSW MP David Shoebridge has been quick to respond to the incident and certainly hasn’t held back in his statement against the actions of the NSW police:

“Imagine being on your way home from work and being stop by police with their drug dogs and strip searched in a tent on a station platform. This isn’t some dystopian future, this is happening right now in Sydney. This is sickening. We need to vote the Liberals out on March 23rd.”

Shoebridge has consistently opposed the NSW Police’s drug searching operations, and today was no different. With the current political climate leading us to state and federal elections, this is certainly another nail in the coffin for the NSW Liberal party.

Considering recent increases to policing at music festivals to prevent drug usage, the need to drug test and strip search city commuters on a Wednesday afternoon seems to be quite out of the ordinary.

Drug sniffer dogs have been a topic of conversation recently, particularly in relation to the new approaches to music festivals and their policing. These have been introduced by the NSW Liberal party due to the increase in drug-related deaths at festivals in recent years.

Drug sniffer dogs have come under scrutiny due to the numbers of ‘false positives’, where a dog incorrectly indicates that an innocent person is carrying drugs.

From responses seen on social media, it is clear that this heavy police presence is not appreciated by most. Leading up to the state elections in two weeks’ time, the government aren’t doing themselves any popularity favours.

Although we see police constantly patrolling trains and platforms, it seems to be a new form of policing to be conducting what are presumed to be drug testing and strip searches.

The impact of these searches and extra policing, from the ire of the Twitter audience, certainly suggests that this operation was not welcome on a Wednesday afternoon at Central station.

What else is to come in regards to extra policing and similar operations? We shall wait and see the outcome of the NSW and federal elections, and the subsequent next steps that are taken in NSW policing standards.